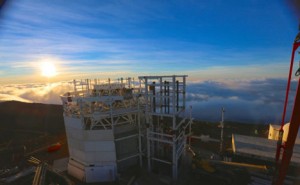 Construction on the new observatory on the summit of the Haleakala Crater on Maui, Hawaii
Credit: National Solar Observatory

Rising 10,000 feet above the sunburned faces of 2.2 million tourists a year, the largest solar telescope on the planet is under construction atop Haleakala Crater in Maui, Hawaii. Never mind all those admonitions about never staring at the sun. Astronomers can’t wait for the chance.
Named for the late Senator Daniel Inouye, the Daniel K. Inouye Solar Telescope or DKIST will be the world’s premier ground-based solar observatory in the world. With its 4-meter (157.5-inch) primary mirror, DKIST is capable of distinguishing features down to 0.03 arc seconds or just 20-70 km (12-44 miles) wide at the sun’s surface. To achieve such fantastic resolutions, the telescope will employ the latest adaptive optics technology to cancel the blurring effects of the atmosphere using a computer-controlled deformable mirror.
The Daniel K. Inouye Solar Telescope (formerly the Advanced Technology Solar Telescope) is being developed by a consortium led by the National Solar Observatory and comprising the University of Chicago, the New Jersey Institute of Technology, University of Hawaii, the High Altitude Observatory, NASA, the U.S. Air Force and others. 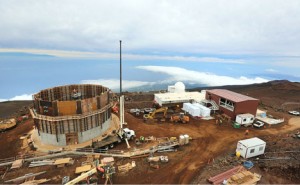 Construction on the new observatory on the summit of the Haleakala Crater on Maui, Hawaii
Credit: National Solar Observatory